OK, it’s been a couple of weeks, so I’ll do the best I can to remember (at my advanced age) what went down.

Warning! Wordy, martinis tend to do that to me. Also, this is not exactly a trail report. It’s more of a weekend report.

So, to start off with, as pretty much everyone who knows me knows, my FJ Cruiser was crushed by a tree back in August. Basically, that’s another story, and I’ll post details of that ongoing saga separately.

So I decided I would go to the FG trackless and hang with some buds, eat some good food and watch other people do some wheeling at Gretchen’s, the breaker of trucks. 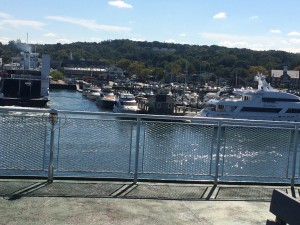 I negotiated with Mark W and convinced him we should take the ferry from LI to CT. This was mostly a selfish notion on my part since I hate to drive through the Bronx getting off LI. I offered to pay our way, and I don’t think Mark minded too much.

Here we are leaving Port Jefferson on Weds. Mark and I both like getting up there a day early so we have a day to relax before the festivities begin. It was a spectacularly beautiful day and perfect for a boat ride. In face, I have been on the ferry dozens of times (really), and I can’t remember the LI sound as flat as it was on this particular day. 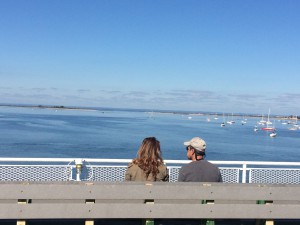 The ferry takes about 1 hour 20, and drops you at Bridgeport. I think if you drive straight through from there it should take less than 3 1/2 hours to Field & Forest.

We don’t know these people.

We arrived some time around 5 and broke the new rules within 2 minutes of getting there. Apparently the new owners (I’m sure OB Misses Gretchen terribly) are sticklers about all kinds of things. One of them being that we can’t bring trailers around to the camp sights like we use do. Being a day early, the signage wasn’t clear. It said “No vehicle trailers beyind this point”.

Bob yelled at us. We went and signed our waiver. Exchanged pleasantries with the new owner, and moved the trailer to the appointed place. All good. 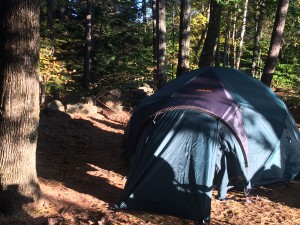 Unloaded the trailer, set up camp. Here’s my new Alaska guide tent from Cabela’s I’m very happy with it but probably should have checked out the instructions before setting it up. I decided it’s a “guide” tent because guides probably have slaves to set up the tent for them. Actually, I think I have figured out a way to set it up that might be easier (which I figured out when I took it down), but that will go untested until the next primitive excursion.

Tent set up. Next order of business, dinner. 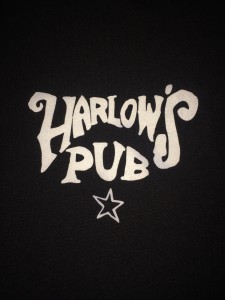 This was an easy choice. Basically, this is something that some of us (you know who you are) think about all year long. The food, the music, and most of all, the show (and by show I mean people). But I do have to admit that the show this year, was not nearly as good as it has been in the past. Except the second night. Not this night. This night Mark and I went alone and decided we should torment Jon, who did not have a legitimate excuse for not being there in our minds. 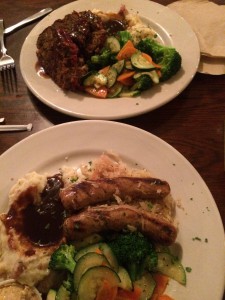 We failed miserably. Jon just ignored us. when we posted this picture of what we ate, Grammy’s Meatloaf for Mark, Bangers and Mash for me. As usual, Harlow’s did not disappoint.

After dinner we returned to the campsite, sat around the campfire, and relaxed.

People started arriving on Thursday. OB, Steve S, Pinz Steve and his traveling show (sons), and Chris M rolled into the campground, some general setting up and planning for dinner (I don’t think I mentioned we eat well at these events), it’s all about the food. Sometimes we go wheeling.

Nothing like crisp New England mornings camping with friends. 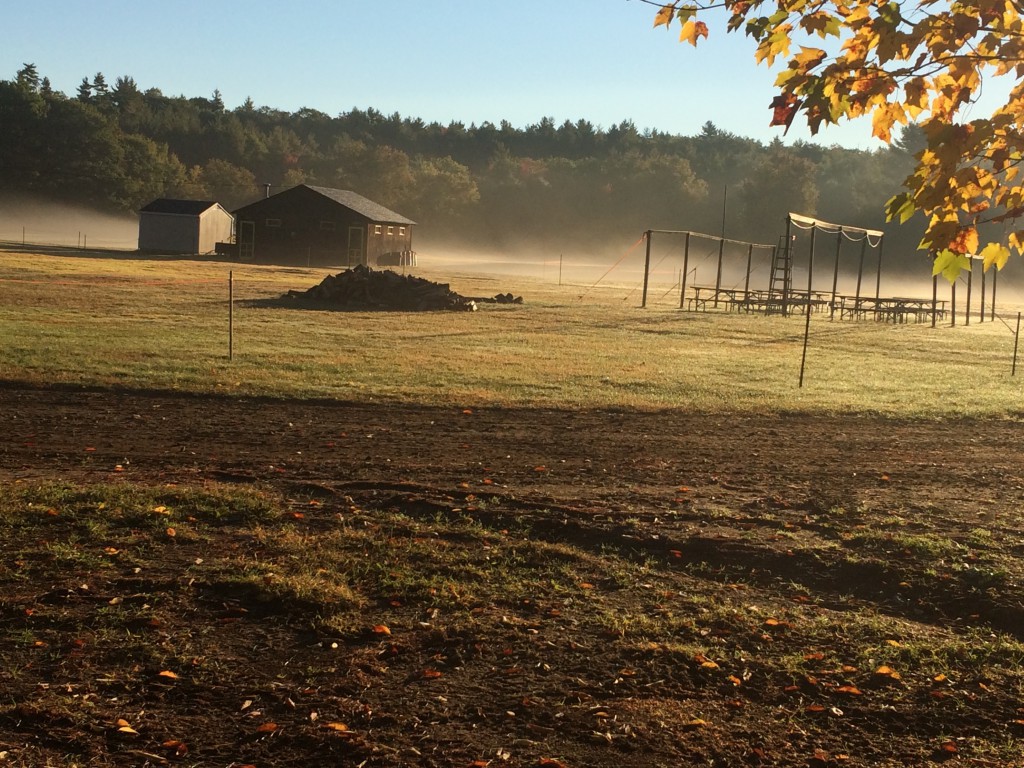 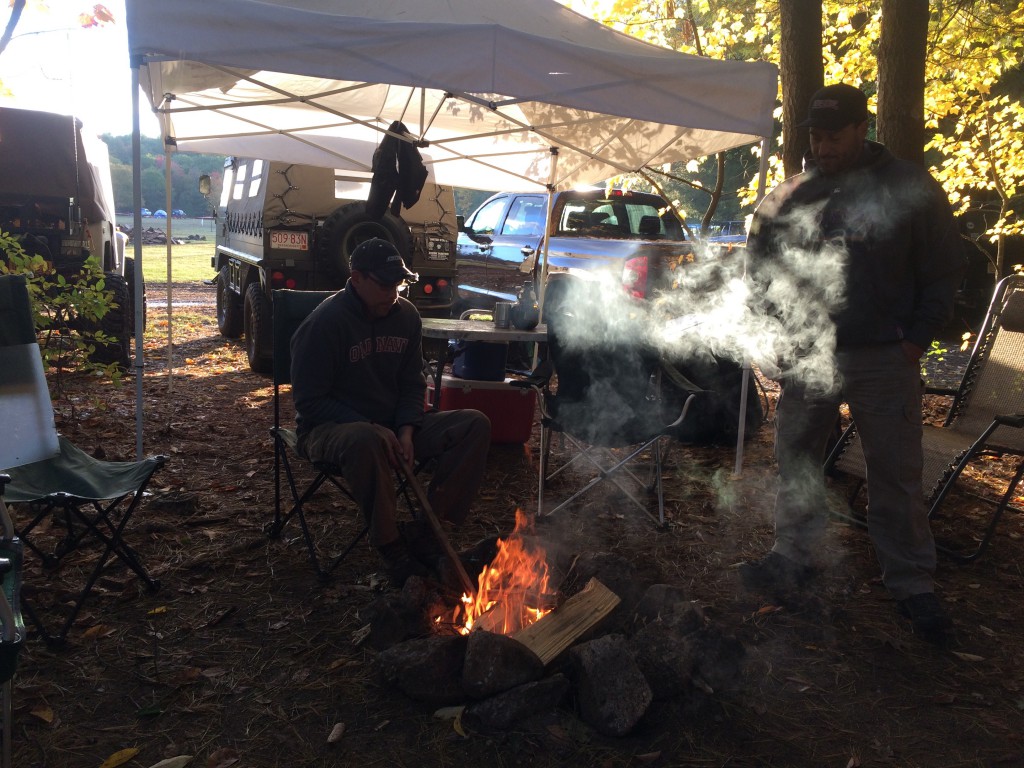 Breakfast and coffee around the campfire

So a little more about food. Basically, we plan for three nights. One night we cook, one night we go out, one night YT supplies BBQ. Originally, we planned on cooking Friday night, but we changed that plan because of the weather forecast, which was rain for Friday. We didn’t think it was a good idea to be trying to get a campground dinner together in the rain. Or at least, we thought it would be easier if we did it Thursday when it wasn’t raining. So we switched. If you were planning on attending Friday night, sorry you missed it, but it was the right decision.

I won’t harp on this, but this is some of what you missed. 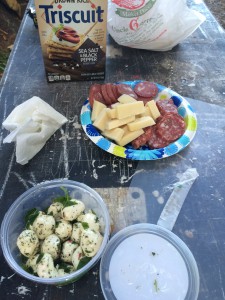 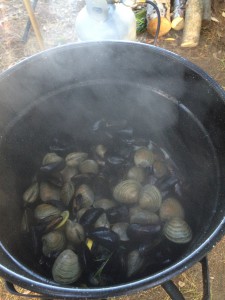 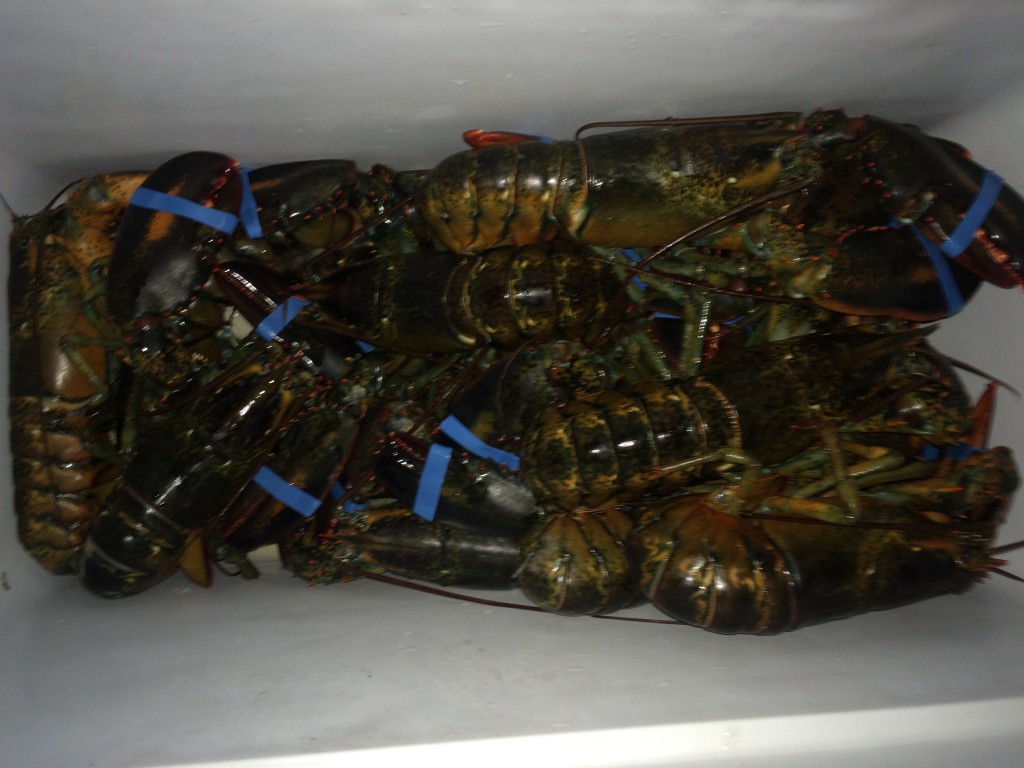 Friday was the first official day of wheeling. This was our group pretty much for the weekend. 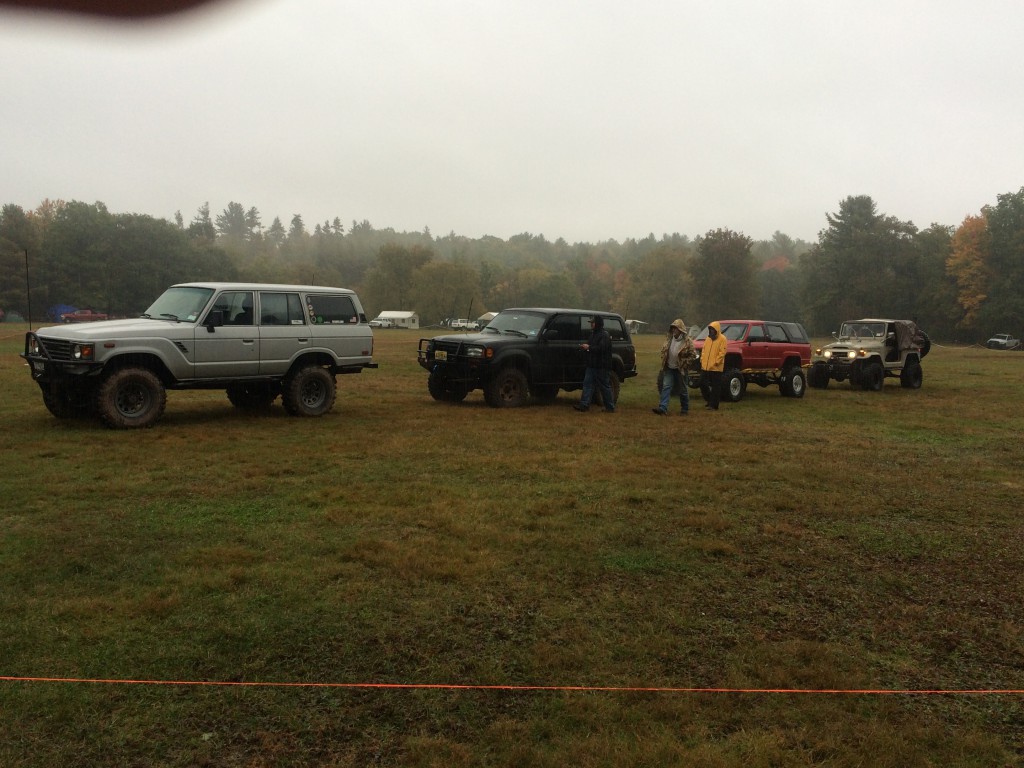 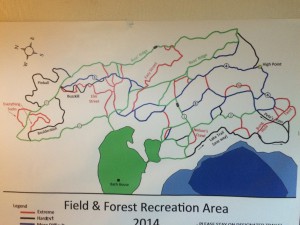 I guess I cut off “est” when I took this picture. I was trying to get as much of the trail network in the picture as possible because at the time I thought this was going to be our map

I rode with Mark, and we led. Followed by Steve S, OB, and Chris M with Pinz Steve and the boys. We stayed at Gretchen’s and decided we would stick to the “green” trails. Green is a relative term. There is a map in the bath house of the trail network. Someone penciled in “est” after easy, which doesn’t really put it into perspective, but at least it’s more accurate. Nothing at Gretchen’s is easy at this point (was it ever?). The obstacles on the green trails are about as tough as any black at Rausch.

Wheeling was great. Details have been posted by others. I mostly hiked, let the way, picked the trails, and spotted. I made a couple of costly spotting errors along the way. You let your guard down for a second and BANG. Hopefully, I will be forgiven and given another chance. 😉

I did take a lot of video. Had the camera strapped to my chest the whole time. I have to edit it down, and will post up video hopefully some time next week.

Did I mention it was cold? 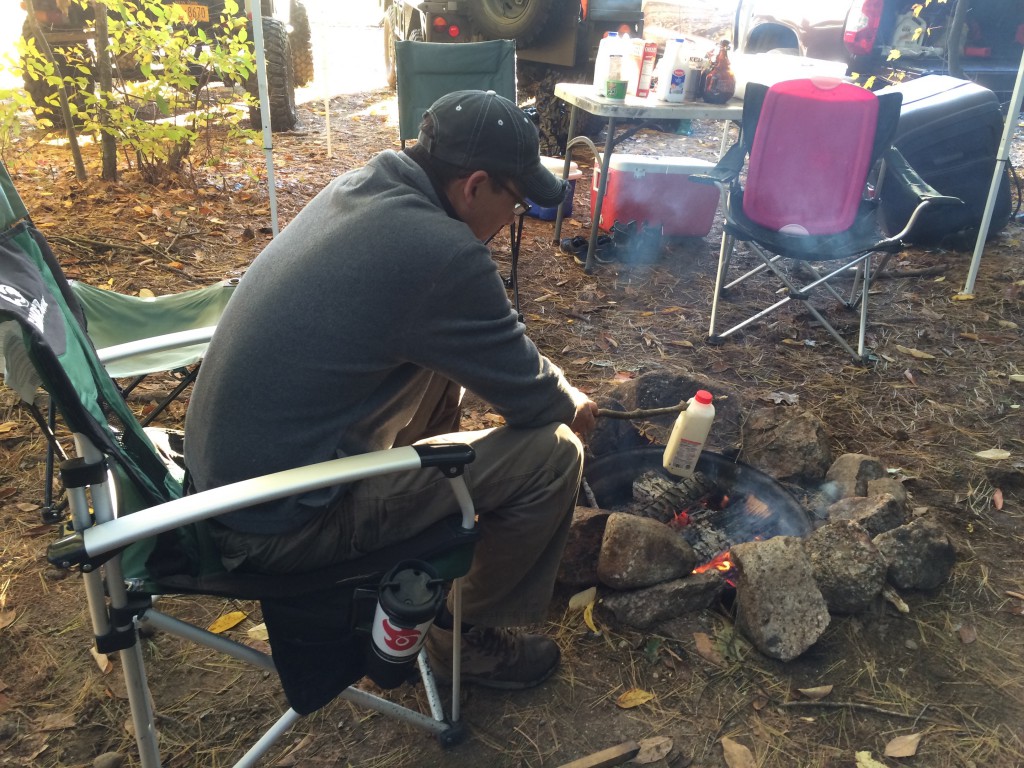 Yes, that is frozen milk. Which led to an experiment… 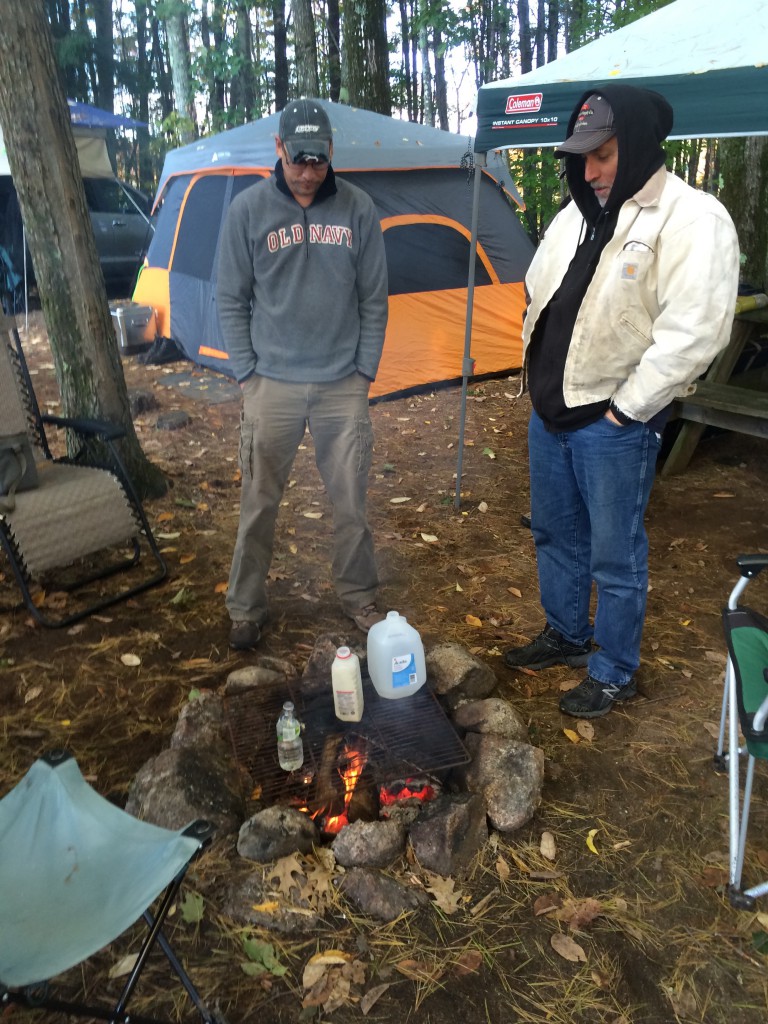 If you put water in a plastic container over an open fire will the plastic melt before the water boils?

We never really proved it, but it looked like it could be true.

One final note. FG 2015 marked the last day that Brandon drove his FJ40, which I have since purchased. It did break on the last day and needed some TLC before I could get it on the road, but that’s another story. 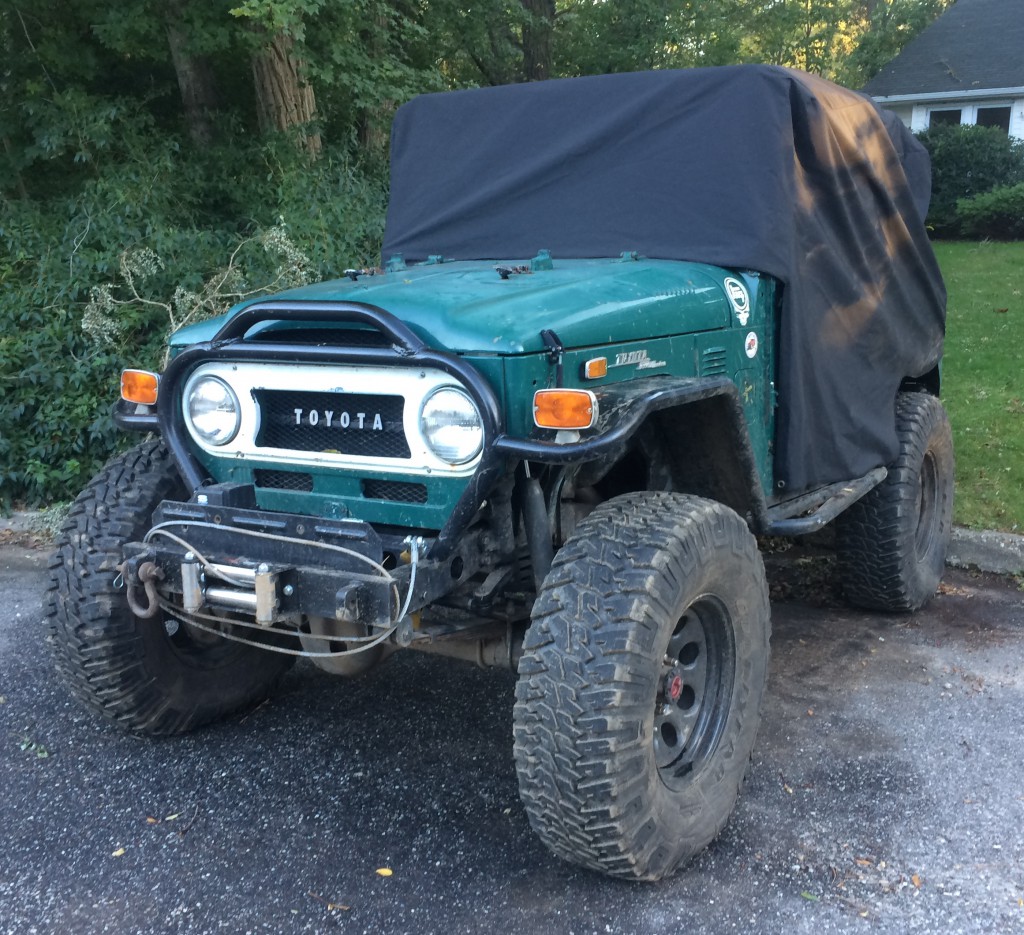