First time back at Dave’s place in a couple of years.

Dave’s is a GCLC club perk. Private property, open to club members only. Groups are generally small, camping is awesome, food is usual GCLC fare (if you don’t know what that is, you are missing out). Dave has been a member and supporter since the early days of the club.

If you look down the road to the right you can see way off in the distance where we camp. Trails are off to the right. 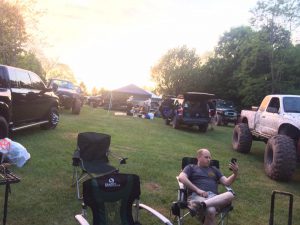 I went up Thursday and stayed till Sunday morning. People come and go as they please. Very casual. When I left there were probably 10 or 12 rigs and maybe 20 people camping out. The weather was almost perfect. Sunny in the 90’s mixed with rain showers. Most of the time in the woods there was no rain. The rain gave us short down times under the canopies of Nick and Terry, hanging out, shooting the breeze and filling our bellies with great food and quite an assortment of liquid refreshments, mostly provided by Nick, who has become quite a connoisseur of craft beer, and Terry, who ate the worm.

This was the second time out for my new/old 40 picked up in a deal with Brandon B. Took the hard top off mack in May, and the weather was perfect for the trip. Drove it up, wheeled it, and drove it back by way of the ferry off Long Island. No driving issues.

Nick and Terry were out on the trails when I got there. Terry was anxious to try out his rig that he’s been working on for the past 2 years. Very impressive! Link to it here, hopefully it is viewable. 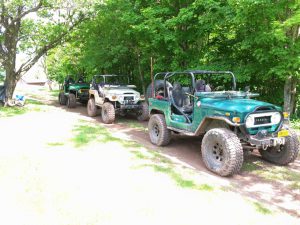 Chris M arrived with his awesome 40 Friday morning. We got out in the woods Friday morning after breakfast. Headed up Elevator Shaft, and my 4WD wasn’t working. Spent a little time looking at it and decided it was better to do that on level ground, so I headed back down to the campground. Turned out the linkage wasn’t engaged. It’s a little funky getting it into 4-Low, but I think I have it all worked out now. Will be switching to a twin-stick setup shortly which should eliminate this problem.

Went back out, caught up with the other guys, who had to do a quick trail weld while I was working out the issues, and were just finishing up when I got there. Wheeled all the rest of the weekend without issue. The truck handled and ran great. 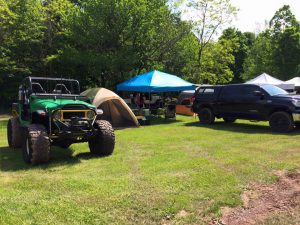 People started arriving later in the day. Steve S in his 80, Capt. Rick with his John Deere 40, Sam with his 4-Runner, and Jay L in the White Rhino. Hopefully, didn’t forget anyone, my memory is good for about a day.

Wheeling happened. The trails at Dave’s are mostly pretty challenging obstacles scattered around the trail network between nice drives through the woods. Some of them are a more than pretty challenging. But it’s a great time, everyone gets to do/try whatever they want. Lots of cable was pulled, and a few go-arounds for some. 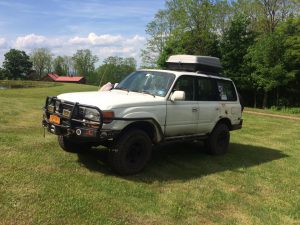 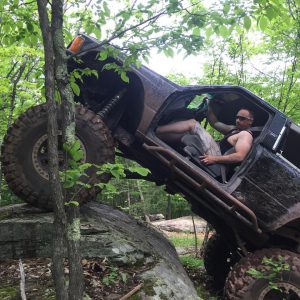 Also helped Dave out with a bit of trail maintenance. He opened up a new obstacle. Only Nick, Terry and the Captain were able to get up it, but it was fun watching.

Friday night we drove through the trails up to the Point Lookout overlook/restaurant for some liquid refreshments with the whole crew, including Dave and his dad Herb. 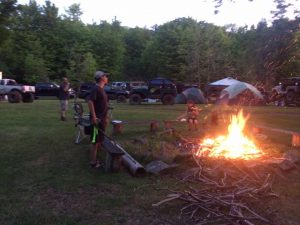 The big meal Saturday night was amazing, as usual. I didn’t bring much, too short on time, but everyone else was kind enough to share (thank you very much). Walking back and forth through the campground, got to sample stuff like, ribs, venison chile, venison sausage, steak, salads, etc. and wrap it all up with sky lanterns and a nice campfire.

Was sorry to have to leave Sunday morning, but other obligations exist. Chris and I rolled out of camp about 6 AM. Beautiful day for a drive down the Taconic with nobody on the road, ending with another peaceful ferry ride to LI.