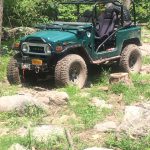 Another CMCC in the books. Thanks to all who attended and all who helped out. Weather was near perfect, all week. This was one of the most enjoyable CMCC events for me. Maybe because of the “new 40”, which performed admirably. Drove 200 miles to Rausch Creek, wheeled 4 days, and drove back. No issues to speak of, except sun burn from driving with the top off, but that’s not really a complaint. 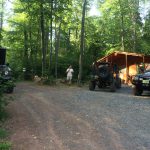 Arrived Monday afternoon. Mark and Jon were already at the cabin. Our cabin was great, as usual. Sat and chatted on the porch for a while after swapping tires, unloading, and generally getting settled. Great to be back together for some wheeling. We like to say we’re a food club with a wheeling problem, so I’ll just mention the food first. 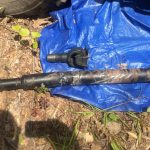 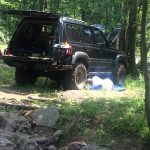 This was a short day. Started out and ended on Pitman Rock, literally. Trying out some new lines, I got up and over with some good spotting from Mark. First time trying something really radical (to me) and the 40 handled it fine. Jon slipped off a big rock and did some major driveshaft damage. He and Mark pulled it and we headed back to camp for the spare. Mark got about 15 feet onto the trail.

Not many people at the park yet. Broke up into 3 small groups. Nobody to lead the green group, so I led, with Jon, Mark, Steve S, Steve (green FJC), and Bill M (stock silver FJC). We toured the park and stayed on green trails only, this being Bill’s first time out. It was a nice leisurely day, and I think Bill is hooked at this point. Hoping to see more of Bill in the future. He will hopefully have some surprises from his Toyota dealership to share. Steve decided it was time to step up from green trails, so I believe the rest of the week he went out on blues.

Still not a great number of people. But we found a good, green trail leader. Thanks to whoever that was, I apologize for missing your name.

Our black-trail group lined up with me and OB as passenger, Scott L in his 40, Andy in his red 4Runr, Chris and his son in his black 4Runr, Kate and Leopold in the black 4Runr, Steve S and Tim in his 80, Mark W in his 60, and Jon, Rachel, and (one man show) Nathan in Jon’s new beast.

No pics from me on this day, but Nathan took a lot. When I get together with him to get them, I’ll update the post. 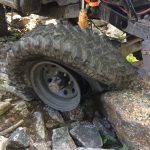 Scott lost a bead on Snakebite 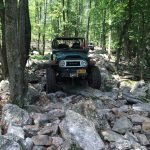 We started out on Topless for Tatas, and ran every black loop off that trail to up the level. We took lunch at the half way point so we could get to Boot Hill. Both trails in real good shape, more spotting needed on Boot Hill than Tatas. Some great challenges and good wheeling there. Brief interlude after lunch. We were pulling out from Tatas and were met by a PA State Trooper. He was looking for a guy in a stolen Bronco with “many” outstanding warrants. He and OB spoke in code for a few minutes, and he said if we saw the guy call 911. From Boot Hill we did 22, then made our way over to Snake bite. Slowed a little by Scott losing a bead. By the time we reached the end of the first part, it was getting a little late and we decided to finish up on the other side of the park.

Made our way back to the East property and ran black trail 1C. This was my first time on that trail, and it was a bit hairy. Lots of off-camber camel-backs. Got into some situations that made me very uncomfortable, but the 40 did awesome, never let me down. Wherever I wanted it to go, it went, happily. 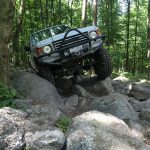 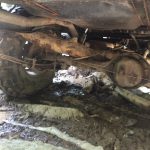 Another great lineup. Me and OB in my 40, followed by Mark in his 60, and Jon and Rachel in the Lexus.

We started out back on Pitman Rock and did almost all of trail 20. No breaks this time, and a great time on the trail. Mark got through a particularly tough section, then drove out and through a small creek bed, over some logs, and joined the Chris S Club when he wedged a log up into his drive train. I also had a minor issue. My front drive shaft separated in the perfect storm of circumstances. I dropped down off a particularly large rock and landed on the oil pan skid. When the front wheels unloaded and didn’t hit the ground the driveshaft extended a little too far and separated. Bungied up the shaft and winced a few feet forward where I could work. Just put it all back together, bolted it up, and carried on. Not sure if I need to do anything other than just be aware. Maybe some kind of limiter on the wheel droop. 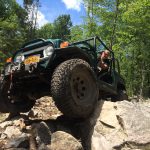 After 20, we made our way over to trail 16 down hill. This was my first time running this trail in this direction, and we got a little messed up because of the logging that went on, but we managed to find our way to Rock Creek, crossed over, and headed out to the East property where we ran trail 5.

One hairy off camber twisty down hill off a precarious ledge at the beginning where Rachel did some awesome driving, spotted by Jon, of course. In fact, Rachel was pretty much the star of the day. Jon let her drive quite a few times over some very difficult terrain and she handled it like a master. I know there are pics of Rachel driving, I’ll have to add one when I get my hands on one.

Didn’t wheel on Saturday, left for home relatively early, but I have to say this was one of the most enjoyable Coal Mines I’ve attended for me. Great weather, great wheeling, great company, great food.

You can say what you want about other clubs, in my mind, this one is the best!