So, this probably started Memorial Weekend 2016 at Dave’s. Not sure where or how, but at some point I started getting a small clunk. Having just replaced the drive shaft a couple of weeks before I never suspected that would be the problem.

It was. But before I knew that for certain I was checking everything I could think of. Eventually the clunk got bigger and added a little chirping. Spoke to a bunch of people I respect. Lots of suggestions, but most involved major down time. So I went with, ‘leave it till it breaks” (which is only bad far from home and/or tools).

I continued driving as my DD until 2 days ago, when 1 block from my house, as I was accelerating from a stop, something gave out and it became obvious I was done for the day. As I coated into a large parking lot and turned the wheel, half of my drive shaft fell off and rolled out. That was when I knew. 😉 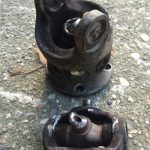 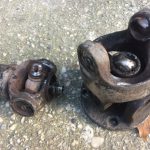 Here are couple of pictures. If you click on the images, you will get a better view, but you can see how the u-joint sheared off and did extensive damage to the yoke and ball (not sure if you can see the damage to the ball (it doesn’t move at this point), and the shaft that inserts into the ball.

Took it to the driveshaft shop. They rebuilt it in a day. It’s back on, and all unwanted noises are gone.

You can be sure that will be the first thing I check next time around.